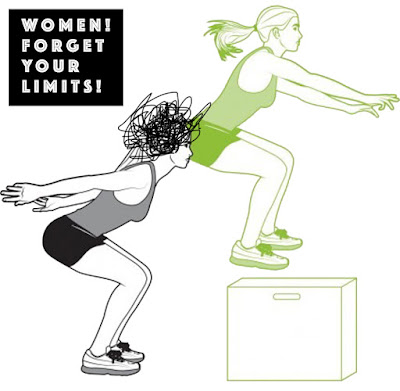 A good day! Had a moment of pure, pooped out joy tonight. My second session with Chasing Lights Collective and Nav put us through a session of a mix of drills and HIIT circuits, with shit loads of Plank related exercises, that we'll probably suffer from in the morning. But.. after years of having a complete block on this one, I finally managed to do what had previously been impossible.

Tonight though, I got it. Stepped up - then down - a couple of times, to work out the height of the outdoor bench I was going to start jumping onto. Then thought "f*ck it! At worst you're gonna fall on your face, but you have two hands and you can stop that from being really painful". So what are you waiting for Barras.. Get your shit together and give it a go! and okay, it wasn't graceful, or perfectly manoeuvred but it was okay.. so I did another, then the full set, then I felt pretty good and they went on, they kinda worked out alright.

I believe that our ability to do stuff is often partially to do with our general fitness levels and mostly to do with the attitude of facing the challenge and getting your head around it. The best way I can describe this, is similar to the fuzzy logic that was so brilliantly taken the piss out of by Harry Enfield's - Women Know Your Limit sketch.

Every time I have been faced with something that really confuses me or seems to push the limit of what I feel capable of achieving, this sketch comes to mind, with the illustration of the effect on the woman's brain. It always makes me laugh and somehow makes me give it a go, to get past the thing that is doing my box in. I don't want to be the fragile, sweet little thing.. I want to be the kick ass bitch who's gonna be able to grab that challenge and drop kick it over the fence.

Big props to Nav though, and all the folks in the group tonight, it was a great session and a little encouragement went a long way. I seriously need to sort my planking out though - core strength is definitely not my speciality :) xx

Credit: Illustration above adapted from a series of Plyometric exercises on the Competitor.com