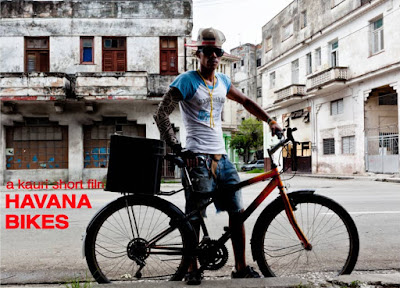 Following up from yesterdays half marathon, I'm taking some time out to relax, take it easy and continue planning my challenges for next year. Though planning the new year should be keeping me busy and out of mischief, I have been toying with the idea of going back to making some short films too. I guess mostly as I would like to get some new creative projects under way, I also need to mix up my cycling time better, to help look after my back, so the day has been focussed on bikes, potential rides and checking out a few local bike workshops and projects, films and documentaries.

So a couple of hours into my 'relax time' I find myself drifting across cycle stores, surrounded by stupid amounts of choice for parts and gear, of all types and prices. None of which I actually need..

The online cart gets emptied and I remind myself of the Cycle Workshops in Cardiff, where John and the guys regularly take on old / dumped / unloved bikes and make them shiney and new again, ready for someone to love. The search for a similar spot continues, then a few pages in, this beautifully shot documentary appears.

Havana Bikes, is a short film charting the period in the 1990's when Cuba went through a bicycle revolution, due to the lack of oil and a period of austerity, where bikes were introduced as alternative transportation for many. Although the motorised vehicles returned, those cycling have been left on a precipice where parts and mechanics are rarely found. Skills are highly sought after and those who can maintain the bikes and scraps of parts are in high demand.

This film focuses on the riders and repairmen who continue to help keep the bikes moving and provides an insight into the cycle community which remains. A reminder that the vast choice of parts and items a cyclist can view as essential, are all relative to actual need and often repair would be a better option, for both your pocket and the environment. We've a lot to learn from this.