I've been an analogue kid for years. Though in my work life I spend more hours per day with computers than without; in my home life, I am much more comfy in a chilled out environment. I like using film cameras, I collect vinyl, I love books..

I resisted moving away from my analogue hearing aids for years, as my old skool ears made voices sound 'warmer', but as the progression of technology carried on, eventually I treated myself to uber digital super ears, that I can control using my iPhone and can stream my music straight into.

I love exercising outdoors & I hate the gym.. well unless the weather is really suspect and I need to keep up my training. Basically there's always going to be a good and bad side to the analogue versus digital world and I know loads of athletes hate using systems like Strava, but there's a couple of reasons why I like to use it.

1.) Most of my cycling buddies live in Cardiff and I live in London.
Its a great way to keep in touch with them, keep a view on how their training is going and give them some love to celebrate and support their efforts whilst being miles apart. It also spurs me on to trying hard too. Their mileage far surpasses mine, but I love seeing their pictures of the green grassy hills and inspires me to get out of the city and enjoy the wilder-life too.

2.) Keeping a record of what I'm doing helps me see progress
I can look back on a week that went well, see what I was doing and make adjustments to how I train in future weeks. Likewise the bad weeks are equally as visible.

3.) Having more 'hyper' spells shows me when I'm over doing it
Keeping a tab on what I have done over the week, shows me the full extent to what I'm getting up to and in periods of too much activity, enables me to see it and slow down. Without this, I would either keep going and knock myself out, forget stuff I've done and over train. Its a good way to keep a lid on times when my 'normal' is not quite right.

4) I like to follow athlete's I admire and support them too
It's great to be able to see how other athletes put in their time, to get their rewards. Its inspiring and encouraging and gives me an idea of the effort I have to make, to be able to get better too. It's also good to be able to share some encouragement and support back. Giving people Kudos is my way of saying I think they're doing great. Even the best need a pat on the back occasionally, no?

5) I like to walk new routes and check out new routines for future runs
Being able to head out and test a route, record it, take photos and know the distance being covered is a great help. If I don't know where I am going, I get really panicky that I won't be able to complete it, or that I'll get lost. If this gets too worrying, I won't go out, I will convince myself its too dangerous and ultimately I'll miss out on seeing some great new places. Like today - I've been out for a really nice walk with two good friends. No rush, no major pace to keep, just some new places to see and in a week or so, maybe I'll run it, or ride it alone 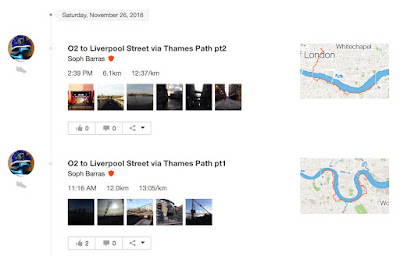 Sure I could do all of the above, if I wrote a paper diary, read shit loads of athletics books and planned my routes with a series of O/S guidebooks. But lets face it, that's not gonna happen.

So for now, I am gonna keep logging my runs, walks and rides on Strava, to keep myself on track. I will keep stopping to take photos, to store a few memories, I will not be killing myself to be Queen of the Segment, to beat a PB, or to virtually compete with anyone else. There's a heap more positives than negatives in my mind at the moment - but maybe that will change in a few months. In the meantime if you want to share a run, a route, some love or say hello.. drop us a line xx