There have been a few key moments over the past few months that have led me towards meeting some really good people. Amongst these experiences I have Trudi to thank, for suggesting I get involved with strange but funny evenings.

Like the day we took part in a World Record Attempt, to hold the world's biggest exercise ball class. I  had done a couple of my runs and was getting on okay with meeting new people, so when I was conscripted into the class of big giggles it was good timing.

The event was in the Copper Box Arena, in the QE Olympic Park and was organised by MullerLight (the yoghurt people). Hosted by the wonder that is Kris Akabusi, there was no way it was going to be fun free.. We were split into groups to make it easier to count us, but none of our group had ever done an exercise ball class either, so we were in good company, falling off our balls, wobbling around. 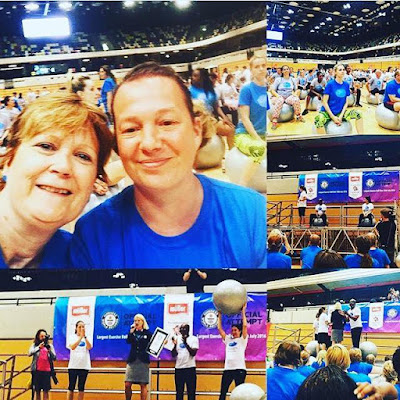 We all jiggled about and managed to grab out spot in the successful record attempt, leaving with a goodie bag, our exercise balls and a pump to keep them up.. However this was the night that my days of running on my own would all change, as the goodie bag contents took me in another direction.

Since March I had been running on my own, attending events and keeping motivated by the good vibes of my Facebook buddies, but I was in need to some actual real life people to do the sporty stuff with. The bag contained a copy of Women's Health magazine and within this was an article about different types of runners. There were a few things that I connected with and I took a look at how to get in touch with them.

So I found contact details of a group called TRIBE, who met up on Tuesdays and made natural protein and energy bars, but got together for group runs.

The Run Dem Crew also met on Tuesdays but were on a break, however their off-shoot group 'Track East' met up on Thursdays at Mile End Stadium. I had done loads of track work as a teenager and missed the discipline, so I gave them a shout too.

There are loads in London.. There's the Fat Club, Adidas Runners, London Midnight Runners.. the list goes on. Some of them run faster and harder than others and to be fair, I wasn't fit enough to join most of them at that stage and a few were off-putting due to the lengths of their runs and my ability to reach them after work, but this a tangent...

The main thing is.. there are other people out there, who probably like doing what you like doing.. but sometimes it takes a chance tangent connection to find them. Sitting at home waiting to find out about them, is probably going to take a lot longer than sticking your neck out and turning up to see how they do..

I'm a World Record holder, and a crap gymnast on an exercise ball, but I'm very glad I went.. If I hadn't gone out that night, I'd never have realised there were a load of great people out there, running around too
xx