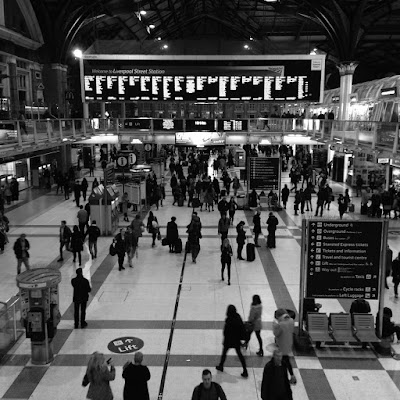 Over the years I have spent a lot of time with big groups of people and been mostly okay with milling about between them all. Every January I would begin the year laughing at my lack of co-ordination in aerobics classes, following the annual binge and need to "quick fix" it all better.

I've had no problem doing a yoga, pilates or dancercise class.. Though this is probably due to my Dad's self deprecating sense of humour, as it taught us how to build a front and take the piss out of ourselves when we got the moves wrong. As my deafness increased I came to realise I would always be one move behind the rest of the class. Shouting 'grapevine' or 'salutation' at me is pointless, but watching the teacher at the front, I can follow along no problem.

Throughout my teens I ran for Halesowen Athletics Club and trained at the Hadley Stadium in Smethwick. I trained for several years, to compete at 800m and 400m distances and after a few really badly strategised races, where I bombed off in the lead, only to bomb out at the end, I got on okay with race day, listened to my coach, enjoyed the competition and happily trained 5 days a week to shave the odd second off, here and there. We'd regularly train as a pack, do drills, go for group runs outside the track and it would be totally cool.

Then on reaching 17, I completely turned my back on it all and was totally uninspired by racing and athletics, so simply walked away at the start of the season, without any sadness. Looking back at it, it may have been due to boys, booze or just a desire to have some free time again. Who knows. But I tried to return to track in my early thirties at the local stadium in Cardiff, only to be deterred by a bunch of girls who were really flippin cliquey, or perhaps I was having a bout of paranoia. I'd had a gap of 15 years since I had previously trained, I was overweight, it wasn't a happy situation, so I left.

So since then I just got on with running alone. I didn't need to feel like I was keeping up with anyone, I didn't have to torture myself for having an extra couple of stones in the trunk, I just concentrated on clearing my head and trying to remember to breathe. I love being able to lose myself in my tunes and being able to run along and choose to turn left or turn right, in which ever direction feels best. I didn't want to talk, or run and talk, just mentally file all my shit back into the right place again.

But every now and then I miss the company, the banter and the friendship of those group training sessions. I like having other people to talk to about running stuff, to ask advice, to give each other that mutual support and encouragement. The only problem these days, is that the desire to meet up with other people, is also wrapped up with anxiety, worry and a lack of confidence that occasionally stops that from happening, despite really wanting to participate.

And the feelings associated with that inability to participate come and go like yo yo's. For instance last week I joined two new groups and had an amazing positive experience and I will definitely be going back to joining them again this week. But by Thursday I was not in the right place to train with my regular folks at Track East and on Friday I completely failed to show up at a social run that I'd had planned for 2 months.

The Friday night session was supposed to be with the London Midnight Runners, for their Matrix Special.. They seem like a great social group, were very welcoming online, but my head just wasn't there and I bailed 100%. I was so mad at myself that I then bailed on meeting up with my mates instead of going, as I had a really strong desire to get shit faced and turn all the stupidness off in my head.

Luckily they were really understanding about it, let me chill and made an arrangement to do something another day. I hid for a while and got up early the next day to join a couple of other friends for a long walk on Saturday instead. I don't know why this happens and whether its my body telling me I'm too tired, or its my head telling me I'm shit, but when that desire to hide or bail comes up, I'm completely taken with it, unless I am letting anyone else down in the process.

Until this year, I had not been scared of busy places, talking to new people or making sense of the noise. Something this year has flicked over though and sometimes I get phased out, like that moment when you are standing in the station, with all the people buzzing around you.

When it washes over, I feel like I'm a tiny pebble being swooshed about on the shore and the waves are in control of everything around me, pushing bigger, stronger and quicker.

In reality, I know this is totally internal to me and that I'm the only one that can change it, one footstep at a time xx
Labels: Anxiety Groups Meeting Up Running
Location: London, UK