It's Good to Have Goals

Not sure how other people get prepared for races, but I needed something to keep me heading out the door each day and a long distance to aim for in my first few months of running. I wanted to complete a half marathon again, as I had previously run the Cardiff Half Marathon, 2009 being the last time I entered.

I had previously done loads of charity bike rides with my Dad too, so running and cycling had always been my 'get out of jail free' card to help with work and life stress. Fundraising was a good reason to do something that helped benefit others whilst ensuring I wouldn't back out of the bigger events.

But in 2012 I was taken into hospital suddenly for surgery on my lower back, to remove a disc which had broken down and which was putting pressure on my spinal cord. It was really quick to degenerate, I had 24 hours notice to prepare for the operation and a slow recovery followed. On the flip side of coming through the op without any major issues I had been told that running was probably not advised in future. Nor would be riding a road bike with dropped handle bars. Though my partner was truly the most supportive person in the world, I was gutted and slowly found myself using other things to attempt to sideline the stress.

This was the beginning of a long period where my weight crept up and I became less and less fit, as I only knew one method for keeping the mind and body happy. It began and ended with Cardio. While I tried Yoga, Swimming and walking, I started to dip and nothing shifted the build up of worry, but life in Cardiff was pretty calm, so I managed to keep a lid on things.

I moved to London in April 2014 and before leaving I had a check up and my MRI scan showed that all was well, aside from a bit of arthritis under the injury area. This was great news but returning to walking and running was slow, I was kind of okay for the first year in London, but didn't take enough time to take care of myself and slowly got older, wider and unhappier.

2015 saw the sudden deaths of 3 friends, through a mixture of mental health issues. Mark and Ellie had died some months apart and my lack of communication with both of them ahead of their deaths weighed heavy on my mind. It is a regret that I can never resolve. The subsequent suicide of a close friends younger brother and the break down of my relationship with my partner had also defined a pathway that I couldn't cope with and I hid behind a series of almost daily trips to the pub, covering up my inability to deal with it all.

I have worked full time since my daughter was 4 years old. I am retained and defined by the regularity of routine and had believed that if I can get to my desk, I am coping and I'm ok. For the remainder of 2015 I hid in work, I crashed at weekends and I provided my daughter with some classy examples of how not to work through your problems. By the time February 2016 came around I was having panic attacks on the tube, I was spent out and needed a drastic change.. 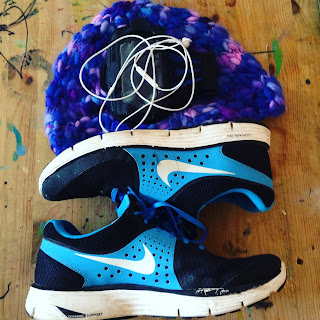 I decided I had to complete a half marathon again.. I would prove to myself that I was able to get better, get fitter and it would require me to train hard and consistently through the year. It has been the single best decision I have made this year. Through training I have met some amazing people and learnt a shed load of things about myself that I had previously taken for granted.

It was the beginning of a beautiful journey, the re-education that it was okay to ask for help, to admit that I wasn't coping and to start again

Endings and beginnings are always interlinked, but its good to choose a destination
xx
Labels: Goals Mind Running Starting