Skip to main content
Labels
Posted by Wheels And Sneakers May 19, 2022

I started riding with the Bicycle Adventure club last Summer (2021), after riding into town to meet the group on their Pride Ride in Birmingham city centre. I was going to be too late to join the ride, but I needed to meet some cycling friends and I was pretty sure I could cycle into town with enough time to join their social part of the evening. As a natural home bear and a bit anxious about meeting 'new people' I am so glad I got passed my nervous faffing, as this choice was one of the best decisions I have made for many years.

The Bicycle Adventure Club, has been gathering together people to join or watch their travels, as they tackle routes across the UK, based primarily around the Midlands. Sarah has been holding a series of workshops this last year too, but that's a whole extra blog post for later. Their YouTube Channel has gathered together many videos of their adventures, which is how I initially got to know of the group, then later finding them and following the group on Facebook

So after a few group rides and some bikepacking test outings with Sarah, planning a big trip seemed like a 100% okay thing to do.. so - Scotland plans were made. We would tackle the Badger Divide and a week of ups and downs beginning at Inverness and completing our route in Glasgow. I mean - how difficult could it be? I tell you how hard it can be.. really f***ing hard! Beautiful - but really really tough. 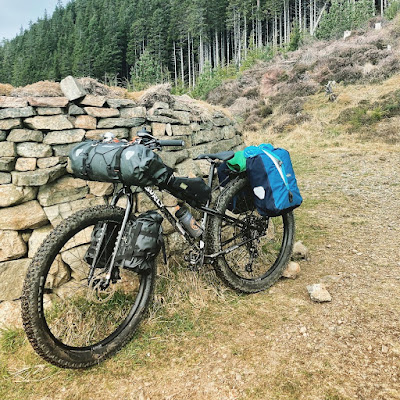 We would start on the sleeper train to Inverness, then head out to the Castle to start the route which has been documented by 'exceptionally fit' folks apparently tackling it on butchers bikes and single speeds.. How the very f**k that is done, I do not know but - well done to you - I am an older, wider lady who after 2 days of riding, pushing and moving up and down mountains decided that albeit beautiful scenery.. I was on my week off work and our pace was not going to let us reach Glasgow in time to meet out return trains the following weekend.
So we had a replan, decided that our goal to get to Glasgow was still possible, but not using the originally planned route. Sarah has loads of experience of route planning and of travels alongside the UK canal network, so it was an easy choice to continue to find alternative routes from Fort Augustus onwards.
Having spent the previous week completing the Dirty Reiver, Sarah is a much more technical MTB rider than I am but I think its fair to say we both looked at elements of our route and felt uneasy about tackling the trails with bikes which were packed so heavily. This was definitely part of our issues with the former route. It's one thing to be able to swing round tight corners or take a risk on a downhill with many lumpy roots underneath you, but when you are carrying a significant amount of tents, kit, food and general gubbins.. not so confidence building.
But our new route, was a much more fun way to spend the week. We are old enough to be able to drop the ego and say - yeah it was hard - I can't be arsed to carry on, without feeling the need to 'keep face' or any of that rubbish.. It had to be a nice week away and pushing your bike up a mountain, between a gazillion gates, just got boring after a while. Taking an alternative direction was a weight off the shoulders and meant we could relax, do a bit of resting at nice places and do a bit of Loch Gazing.
We documented the journey which took us from Fort Augustus to Fort William, then onwards to Loch Lomond and down to Glasgow, following the waterways rather than the moorlands. Stunning scenery and a lot of trail mix later, we completed just 20 miles short of our destination due to Sarah unfortunately getting taken out by a sneaky slippy back wheel and a wet boardwalk on our last day. She has luckily walked away with a cracked rib, but we have agreed to return to the train station where we called a 'Timeout' on the journey, so we can finish our route to Glasgow, then start a new adventure towards Edinburgh and beyond.
In the meantime, here's the video of our week - I hope you enjoy it as much as we did xx
Labels: Adventures Bicycle Adventure Club Bike Packing Challenge Cycling Documentary Endurance Film Touring
Location: Inverness, UK