Getting Beyond the Bus Stop

2016 has been a shocker for many.. The start of the year and the end of 2015 had been bitter and I was struggling to get my head around much of life in London and changes in my personal life. I'd put on loads of weight and was in a pit that I wasn't clear on how to get out of.. Things were far from good and I was fighting through layers of problems that I just couldn't vocalise any more

At the end of February I had a huge crash into the dark days and visited my GP, who referred me to my local mental health team. While I was waiting for a counsellor to be assigned I was struggling to keep on top of everything and took a look at where I was physically. I wasn't sleeping properly; I was waking up at 4-5am each day, worrying about the world, what I had become and the chances of getting through the days. I realised that I couldn't carry on waiting for help and needed to get outdoors and get moving.

I sheepishly attempted my first run.. I got out the house early. So early no-one would see me. I tried my best to shut down the inner monologue telling me I was stupid, old and too fat to run. I tried really hard to get myself prepped up to blast out of the block, run round the corner and get back in time before anyone saw me.. I ran as fast as I could - I got as far as the bus stop 100m down the road

My lungs burned, my head pounded, my face turned a huge beetroot red - I was f**ked. 42 years old and in the worst shape of my life, with a head that kept telling me I was a failure and a body that clearly wasn't going to turn heads for any of the right reasons.. It was shameful

So, it could have ended up stopping there, and for a few days it nearly did. But as a teenager I had spent years training as a runner and at various times in my life, I have returned to putting repetitive feet in front of one another, to help resolve the cloudy head and darker days.

It's a method that works well for me, to get through the mental filing that can't be achieved through normal day to day working and being mum. It's also one of the few times in my life when I am in control of my thoughts, my direction of travel and I am truly on my own. So if my 1st attempt had been terrible, I came to think that it couldn't really have gone much worse, so I tried again.

This time, I decided that I would go for a power walk, not too far, just a few laps of the local park, then back home.. It went ok.. Tomorrow I would get further - I started a playlist and made a pact.

I set up my trainers and my running gear in the bathroom each night, so I would wake up like the 'Elves and the Shoemaker' - get dressed half asleep, pick up my keys, close the door, walk down the 5 floors of my flats and never look out the window, before the ground floor and out the front door. Never check the weather, just get up and out as quick as possible.

I started a mix of walking and running.. now being able to jog to the park, round the outside, walk through the short pathway then do loops of the park and return home. I started to track my distance, not really too fussed on time, but started to increase the amount of each until I was ready to go further.

The park turned out to be too short after a few months and I began to try to reach the docks. The view of the sun on the water in Royal Victoria Docks in the spring / summer mornings was amazing. By now my counselling had started too and I was working through a lot of issues that I had been beating myself up over. I learnt to be a bit kinder to myself and to enjoy my runs, making strategies on how I was going to complete each morning.. Run the flats, walk the bridges, sprint a few lampposts. This was a personal race, but mostly to will myself to get better.

My counsellor suggested I stop isolating myself, call a friend, go for a cuppa, have some proper conversations with people and keep up the exercise. Over time I did all of the above and decided to stop my visits to the drop in centre and let someone else in deeper crisis, have their help and support.

Over the coming months, my runs continued.. I bought a new bike on my Cycle To Work scheme and set myself a few goals. To get better, to raise money to help others who were suffering with mental health problems and to find ways to keep busy and healthy again.

This year has been tough but its had a lot of high points too, so I wanted to get a few things out of my head and into this blog to share a mixture of explanations of my journey. It will probably cover a few races on bikes and feet over time, plus a space to share the info and support I have found along the way.

Its not a plan for anyone to follow, or a suggestion that this will help resolve other people's issues. I'm still learning to be open about how I've been affected by depression and anxiety in the past year, so I hope by writing a few bits down, that others will also keep talking, doing and being. 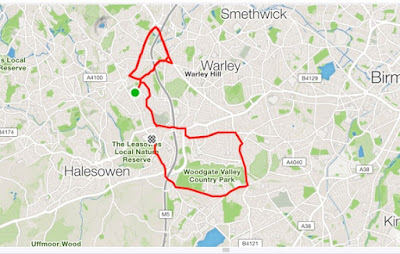 Posted by Wheels And Sneakers

What a Difference a Week makes