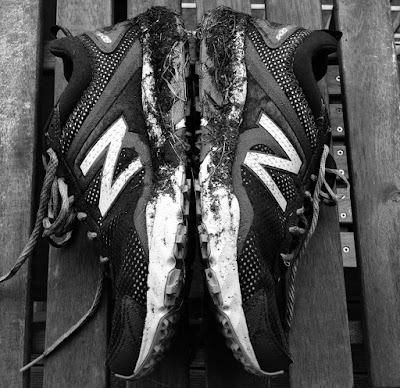 There's a lot of research, into the effectiveness of exercise for treating depression. I do believe that in my own case, it's definitely helping, but it's not always for the expected symptomatic reasons. For instance I do not subscribe to the train of thought, that telling people to go for a run, will make them 'better'. There are many reasons why someone who has low self esteem, will feel invigorated by leaving the house and doing more exercise, but it doesn't mean that will cure depression.

In its many guises and forces, depression is not 'fixed' by getting outdoors and exerting yourself. Medication is necessary for many people to get moving every day and this shouldn't be a negative thing. There are loads of arguments for and against meds too, but at this time I am not personally taking anything to help me climb out of the holes, when they appear. Having watched friends being switched from one med brand to another, purely because the current locum thought it would be okay, and the devastating effects it would frequently have on their ability to get shit done - I am holding off from this, at the moment.

I also spent most of my childhood and teenage years on anti-convulsant medication for epilepsy, side effects of which are.. you guessed it - Manic Depression / Bi Polar Disorder. I don't blame my parents for this. I had some major seizures as a child and they were advised by a specialist, that I would need to be on them for life. When I eventually left home and was in charge of my own destiny, I took myself off them - had a couple of years of infrequent giant seizures, then they just stopped. My body popping episodes decreased the more I ate, the more I slept, the less stress I gave myself. Learning to look after myself a bit better has enabled me to be free of meds and seizures since 2001. I am lucky.. some folks have 100 fits a day and will be on a cocktail of meds they can never get away from.

My point is.. where the brain is concerned, there is no 'one size fits all' approach that you can take. What will work well for me one month, is not so good the next, but I am far from alone in how depression shifts and moves. I notice that on weeks where I exercise loads and don't drink, I feel a lot better than weeks where I do less exercise. I recognise (albeit 42 years in) that Alcohol triggers my episodes. I have come to realise that this is not new and that I have suffered with depressive bouts for many years.

I would previously subscribe to the 'one week bender' as a fix to shut down the bullshit in my head and move all issues to the left for a while. It doesn't work. It builds up and then you crash eventually. At least now that I am exercising a lot and not drinking regularly, I find it easier to regulate and notice the symptoms - but it's not a fix. I still feel like shit occasionally, but less regularly than before. I can't sleep well again at the moment, but this will pass again soon and Pops has promised to come and sit on me at 10pm each night, to help me wind down the brain. Dark room therapy.

Its probably fair to say that in many instances it alleviates some types of low mood, but if you have a chemical imbalance that is causing you severe depressive bouts then exercise can be beneficial as part of a range of treatments.

Potentially, using exercise to overcome Depression or Anxiety could help you with a few things...

- Encourages you to be up and more active, getting dressed and out of the house
- Meet other people and start conversations if joining groups / classes
- Knacker you out, so that you eventually are forced to sleep
- Give yourself a sense of achievement and pride when you see yourself getting better at your chosen sport / exercise class

I read the fact sheet below from the Black Dog Institute and a few bits of this made sense to me, so I thought I would share it in case it's helpful to others. It's good to see they talk about exercise being a 'helpful strategy alongside other treatments', rather than being the answer.

Like the recent sharing of the image of trees v pills, please don't try to categorise how your fix works and what suits you will suit all. If that were the same for all elements of life, we'd all be called 'Bob', wear suits and go back in our boxes each night.. We're all individuals with differing reasons, thoughts and issues - It would be great if everyone could learn to embrace the differences and accept the combined lack of understanding. We are all learning together xx