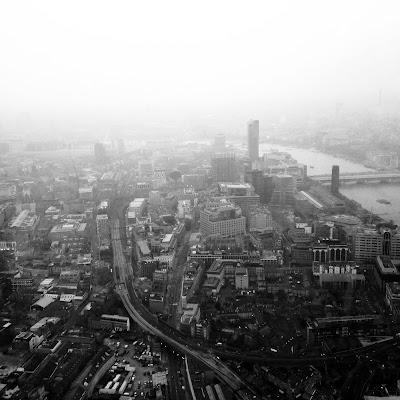 Over the past year many things have changed. This week has been one of the most positive by far, with new directions and faces, there are key moments when you realise you have come a long way.

The picture above, taken from Heron House during a meeting I attended in March. I was really unwell, I kept wanting to disappear into the distance, melt through the glass and hit the deck. Insignificant, unable to talk to anyone about how I was feeling and like a lost speck of cells gathering and standing - existing.

For the past year I have been building up slowly, trying to gather my thoughts into something more logical and acceptable, while the body starts to learn how to work again. Its been a complete head f*ck at times and I have had frustrations when I felt that I wasn't getting better quick enough. I have always had the mindset that 'Time is a good friend' - 'It will all make sense eventually'.. but jeez sometimes, you just wish that time would hurry the f*ck up.

Skip along a few months, the fundraising kept me focussed but I have still been really missing the interactions with people. Non-work people.. People that don't necessarily want me to do anything for them, but who I feel like I want to do more stuff with.

I really regret not seeing Mark and Ellie and losing contact with them when I left Cardiff. Their deaths had a huge effect on how I viewed the friendships I had formed over the years. We take for granted that the people we love and admire, know how we feel about them, or will be around when we find time to call in and see them. Just keeping up with people via social media is bullshit. It's lazy, often glossed over with our interpretations of how they appear, and mostly inaccurate.

I decided that this year I would catch up in person with those people who mean a lot to me.. Some I haven't seen for years. Jo and I caught up in Brighton for an afternoon, for a cuppa, for the 1st time in 18 years! Sure this was an extreme case, but I'd looked for Jo for so long and had no joy, that I had almost come to the conclusion that she had passed. She finally submitted to Facecrack and got in touch. We arranged to meet and had the most open, easy conversation I'd known for years. No judgement, no front, just an afternoon of honesty, about where we'd been, where we currently were.

Since then I have been trying to see others. I've met my old buddies for breakfasts, roasts, brews, days in pjs doing f*ck all, plus some by email only (I'm not the only one with anxiety issues). It continues.

As an adult its hard to meet other adults unless you meet via work, college, through existing friends. I found my first years in London particularly hard and cold, but I guess that is just the size and speed of the city. I have some great friends in work, but I like my home and work lives to be separate. Its important for me to have that switch off and to keep those lines drawn.

But through running, I have met some of the kindest, happiest, most positive people and this week has been testament to the goodness that London does have to share. I have been training sporadically with the folks at Track East over the past few months. Paul and the team have been great at encouraging me and welcoming me on the sessions I have been able to attend.

Last week I had a message from the group, to tell me that the main Run Dem Crew was meeting in East London, to reform and celebrate the women and those who had recently run the New York Marathon. It had been a few months since they had gathered and there was a lot of housekeeping.. So much housekeeping that I didn't have time to run, so I ended up running home and back to Pops.

My folks from Track East, Junior and Chris, introduced me to Charlie and Chevy and a load of other folks said 'hi' and made me feel at ease. I was a big bundle of smiles when I got home and felt really pleased that I got over my nerves and went along to the meeting. It was so good to see other people being rewarded and supported for working so hard towards their runs. A family that was taking time to take care of each other, celebrating each others achievements.

So I have taken the plunge this week and dropped into two sessions.. I joined Chasing Lights Collective on Monday night and the Run Dem Crew short run last night. It's really early days and though I felt really scared about joining in on Monday, I felt absolutely at home after about 10 minutes in. It was pissing it down, I arrived late, I wasn't feeling 100% cool about joining in, but everyone made me feel at ease.

So I headed to the Run Dem Crew session last night and though it initially took a little while to come out of my shell and drop my guard, I got some big smiles on arrival, introduced myself awkwardly and was rewarded with some amazing conversations and laughter over the evening. I ran the short run, had a lot of good vibes and realised that I was going to be okay.

I couldn't have done that 6 months ago. I would have run away from anyone who was being nice to me, as I didn't feel worthy of time spent, or like I had the ability to keep up.

It was only 2 sessions, but its made me feel a lot better about myself already. I feel like next week, will be easier and I will be even more open to talking to people and enjoying the vibes from all who make up the crew. So a huge thank you to all Track East, Chasing Lights and Run Dem Crew people. You made this bear very happy this week! xx 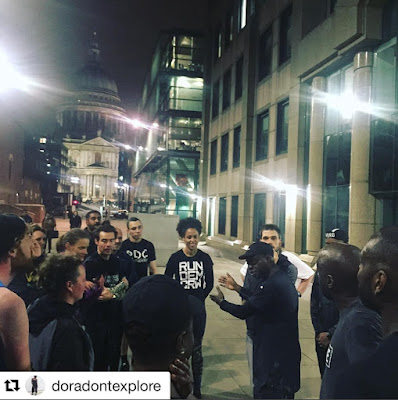