Skip to main content
Labels
Posted by Wheels And Sneakers May 16, 2022

Since I moved back to the Midlands I have been continuing to find new ways to keep active over my weekends and particularly when the world was opening up a little more last summer, I started looking at what was on my doorstep, rather than booking travels and adventures further away. I'm always interested in exploring new ways to keep my head well and the open water swimming thing, kept coming up in my newsfeed, as well as hearing conversations with an old friend who had taken to daily sea swims, as a regulator on darker days.
I have met some lovely folks through the zoom training sessions I joined through my coach Nathan, during 2020 and one of the ladies who regularly swam mentioned there was a venue, really close by. Nina had been going for a while with her friend and despite many invitations to join her, I initially hadn't taken up the invitations.
Having found my old NOWCA band during one of those lost afternoon tidy-ups, I decided to check the website for venues and to see if my band was still possible to use. The NOWCA scheme is a nationwide Open Water Swimming network which has an annual membership of £15 per year. This provides you with a waterproof bracelet that contains a chip on which you pre-load your emergency contact details. This has to be worn on every swim you take at organised events, but it also enables you to swim at any one of their 40 venues and provides an app which you can book swim and coaching sessions through.
I had originally joined NOWCA when I lived near London Victoria Docks and was trying to prepare for the Swim the Serpentine event. I found the Docks extremely foreboding and intimidating as a venue for open water swimming. I also felt really out of place when I joined the scheme as I was probably a dress size 18/20 at the time and when I rocked up to participate it was clear that I was not their usual shaped member. There was wetsuit hire available but nothing in my size. There was no beach / easy way in or out, so whilst I had entered the water easily on my first session, I grew cold really quickly and with no upper body strength I literally could not haul myself out of the water.
Having faced the humiliation of having to ask someone to help drag me out of the water, I felt ashamed, and stupid and never wanted to put myself through that experience again. I threw my NOWCA band in a bag and pushed that experience into the recesses of bad vibes and notched it up to another shit 2017 experience in a year that was dealing some blows. So - It was with a little fear and dread that I decided to research a venue near to my new home, hopeful that this would be a little more positive.
Netherton Open Water Swimming (hosted at Dudley Watersports centre) is so far away from my Docklands experience. I have felt so welcome on every visit I have made since July 2021 and the hosts and attendees are really welcoming and supportive to everyone who comes along.
I also have to preface this article with the confirmation that I am NOT a good swimmer. I have total admiration or the human/fish people who can effortlessly glide through the glassy reservoir each week.. but they are not my people. I left school with my 25m badge. I was not the kid who ended up diving for a brick in their pjs and getting the good badges. I was happy to not drown each week and cross the big pool, not swim the full length. In fact I think I got my 25m badge as they let me complete it back stroke. I only became a better swimmer when I was pregnant in my 20's and the Empire Pool in Cardiff was a fantastic place to cool down in the summer heatwave of 1996. 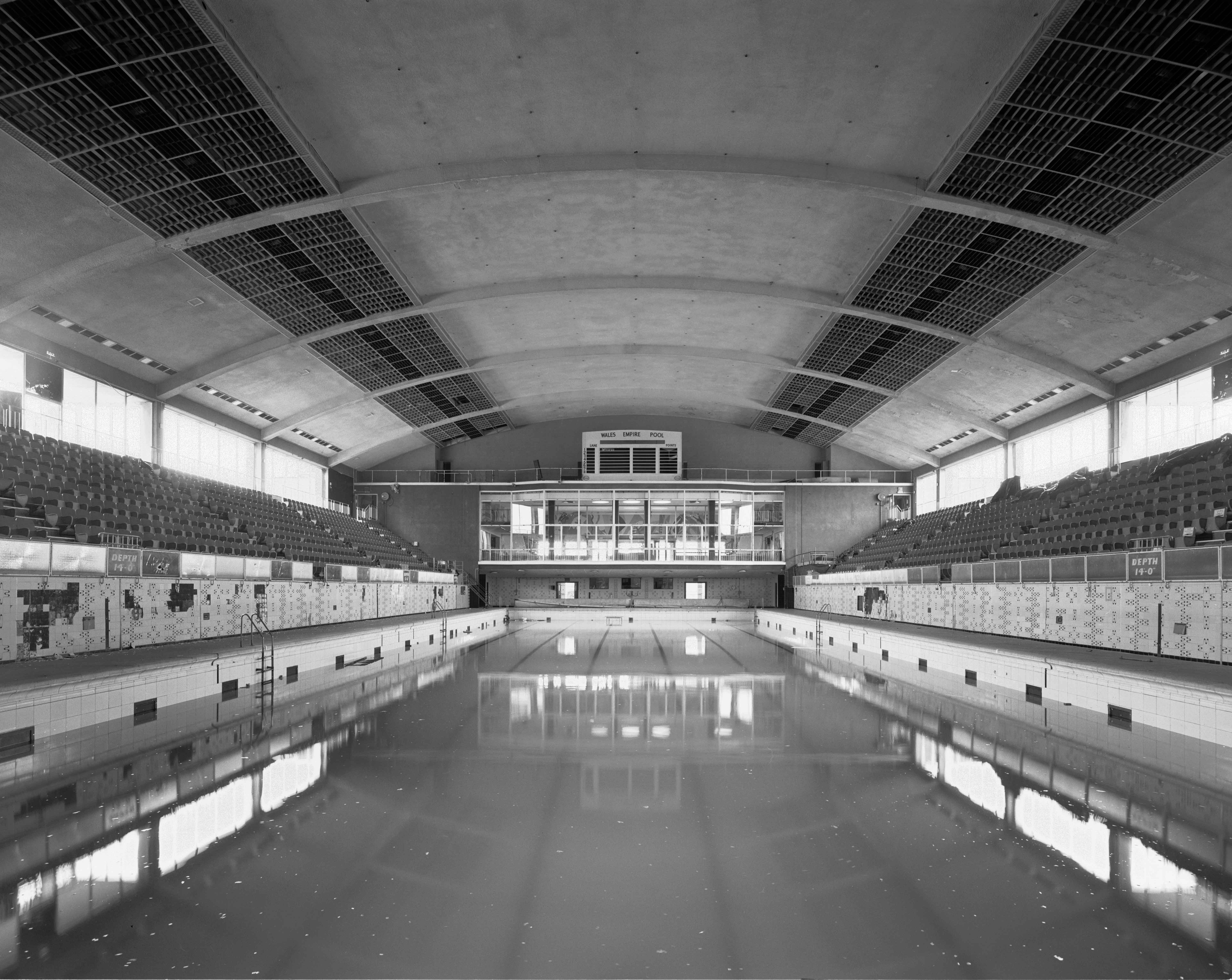 The Empire Pool was unfortunately demolished to make way for the Rugby Ground to expand into the current stadium you see in central Cardiff today. It was an olympic length pool which was built in 1958 and their daily happy hour swim (40p) was the cheapest way to get a warm shower and a really good cool down, for a girl on the dole, during a stupidly hot summer. It was also a great way to keep in shape and learn that it was totally okay to swim breaststroke super slowly, many years before the concept of 'swimming for wellness' was a thing.
The Empire had brought many happy memories for swimming and potentially the act of 'cooling down' through the medium of water, had also appealed and given me some positive mental connections to where my new 'outdoors and open' swimming would take me. From a girl at school who could only swim 25m at a push, to a young mum to be, who was eventually swimming 20 x 50m lengths a session, it formed a safe place and pastime for me, which I reflect back happily to.
But - The idea of swimming outdoors in a reservoir triggers loads of reasons to be fearful. This particular place is alongside the canal - a place where we were always told- you should never swim in, as this would lead to death.. 100% - don't do it..
So each week I arrive.. I feel slightly more comfortable as the sessions get more familiar, but generally I spend the first few minutes, hopeful that my wetsuit fits.. Only because if it doesn't then I will have to get brave like the many men and women who have been swimming without wetsuits all winter and admit that I am a total p**sy when it comes to the fear of being cold. In truth I am usually in my wetsuit, with wetsuit shoes and gloves.. horrified at the touch of any kind of reeds in the water and of succumbing to the  effects of extreme cold.. Something which the hardy, Netherton swimmers of all ages and sizes give the grand total of zero f**ks about.
Then I get into the water and I spend the entire outward swim thinking its so far away to the first buoy, there's no way I can safely make it.. to then arriving at the buoy and thinking 'oh - I'm here!'.. then finally being wonderfully suprised that O-M-G I have actually made it to the end!..
For a woman with anxiety - it's a fu**ing battle every time, but I love the feeling I get knowing I completed it. Each time, I have to learn to breathe - Concentrate on breathing and thinking of nothing but keeping safe and keeping swimming - Feeling nothing else but the swim.
And that's where the meditation comes. Where the feeling of nothing but being in the water matters.. Where the ducks, birds and sunshine are in glorious technicolour and really nothing else is on my mind until I eventually reach the shore once more. That's totally why it works for me. I am so preoccupied being worried about dying in the first part of the swim, that I have to learn to focus on nothing else but breath.. Until - Eventually my mind moves over to being 100% grateful for experiencing that moment, then onwards to being alive.
So now I have seen Nina at the Rezza many times and my enthusiasm to pull a few friends along has led to the ParkRun ladies also joining through the winter months. It's become a definite regular activity for many of us, so I continue to want to shout the benefits, to anyone who wishes to listen. Like a Windows Refresh for the mind, it helps to ground even the most stressed of individuals.
It's worth a try in all conditions, but when all odds are stacked, or when the week feels like its kicked you in the teeth. The sun on the water, the cold crisp shock to the system in the initial few meters of swimming, then the fight to keep moving, breathing, being. Sometimes the basics are all you need to remind yourself of the value and joy of the earth and life around you. Time to reflect. Time to Breathe. It's Dory time. Just Keep Swimming xx 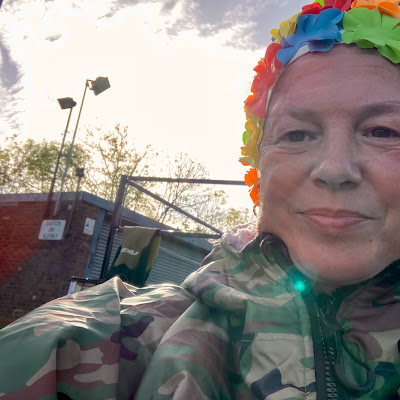