Moving in New Directions - All aboard 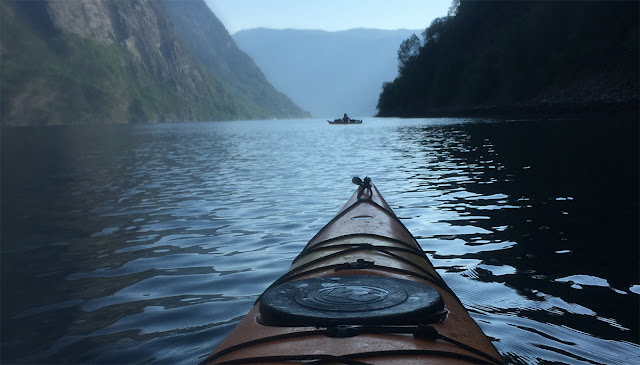 Last year I was trying to find alternative ways to switch off and to find a reason to keep my head up. I was in need of a new challenge, which didn't involve running, something that would enable me to escape the city for a short break and be a reward worth keeping on for.

I'd been investigating adventure breaks for a while, then kept getting bombarded with facebook adverts for a company who promised to enable short breaks - weekend adventures and make them easy to book up. Welcome to "Much Better Adventures" - a global partner for hundreds of local guides which allow you to pay a small deposit and slowly edge your payments towards the trip.

I had been looking for something peaceful and completely different from my usual trips and became completely smitten with the idea of paddling along the fjords of Norway. Like all online ideas and challenges, the paying for the experience is the easy part. Sure it took me some months to chip away at it, but even though it wasn't going to be an average holiday, planning and doing are two very separate experiences.

Due to my bike crash my initial booking had been moved back by 10 months, so the lead up had been building a really long time. For ages it was just that thing that I kept in my back pocket as the reason why I kept trying to keep my fitness levels up, despite falling out of the love of running a little bit.

I tried to spend time going to the gym to build up my upper body strength, I have been trying to maintain some kind of regular yoga activity, but really this was a challenge to get my anxiety in check. I am an okay swimmer - I had swam a mile around the Serpentine in 2016, but I am no way a strong / regular swimmer. I've been scared of falling into open water for years, but its not the being in the water that worries me, its the inability to get back out again. A fear that was amplified by a session in London Docklands open water swimming sessions, where I quickly became too cold to lift myself out of the water, in an overly tight wetsuit, with arms too weak to pull myself up.

So.. "Why don't you just get a pedallo in the park?" Nav said to me a few days before leaving.. Well, yes that was also running through my mind as I arrived at the edge of the Fjord on Saturday morning too. This was the first solo trip I had been on this year. My Dad has been unwell recently and had joked that he wasn't able to come and pick me up from hospital if it all went shit shaped - so I was to take care. I'd got form now for getting into scrapes, so had to be a bit braver about it and not show my fear.

Initially I arrived in Bergen and the only other people I met at the airport who were being transferred by the tour operators were two groups of stag parties. Very nice people, totally respectful and in no way the laddish bravado displayed that you could imagine, but it immediately reminded me of a bad snowboarding trip I'd been on in my 30's and I hoped I would never repeat the experience. Thankfully they were really sweet and aware that I was possibly feeling a little uneasy travelling alone.

In the morning we all got shuttled from our hostel to meet a bigger bus at Voss where the main group were also heading to the same starting point. Some people were doing the 2 day trip with me, others were making a 3 day tour, by including a day of hiking in the middle. I was pleased to see other girls in the group, a mix of genders, ages, sizes and shapes - some experienced kayakers.. many of us not at all .. our groups were split and I found myself with the nicest most welcoming bunch of people. Exactly what I needed to settle into the days ahead.

The local company running the expedition were "Nordic Ventures". They specialise in Sea Kayak and Hiking tours along the UNESCO Heritage site of the Nærøyfjord. They provide the Kayaks, tents, wet suits, instructions, food and generally make everything work exactly as you need it. Our guide was the most peaceful chilled guy, who looked after us and totally kept us at ease. Something which was a major achievement given my building state of anxiety.

We had our safety briefing, packed our kit and supplies into our kayaks and most of the group casually launched out onto the fjord. I became terrified but had that horrible 'there's no turning back' moment that pushed my heart into my mouth and my inner voice to shout 'WTAF are you doing Soph?'. This had to be my most stupid idea yet.. I couldn't just fuck off to Wales for a weekend in Brecon and try it for a couple of hours - oh no! I had to travel to Norway and push myself away from shore on a 24km expedition instead - what a tw*t!

Luckily for me, one of the other members of my group - a lad called Barney - obviously sensed I was about to totally lose my shit, while drifting towards his kayak with zero control and helped me get my rudder down into the water, so I could steer and talked me through the finer details of turning with the pedals and using the oar properly. I very quickly realised how little I could move on the boat without wobbling all over the place and realised I just had to breathe, calm the f**k down and get on with this reality that I had placed myself into.

And so we drifted off and I tried to keep up with the group for a while, there were times when I got my flow sorted and I was ahead of the group. A few times when I just sat on my little piece of plastic amongst the giant rocks thinking how insignificantly small I was and how huge these wonderful rocks and waterfalls were. I took a couple of pictures but we paddled for hours each day and there were so many things that my eyes could grab hold of and store into memory in a way that no iPhone / fancy camera skills could ever measure up to.

I had a cry on the first day a few times. Not out of frustration or fear. Just being present and happy and pleased that throughout all the hard times I was still able to see something that made me feel really pleased to be alive and grateful to see this. I reflected multiple times on each day where the group were gathered but scattered nearby, the water was totally calm and I took a few minutes to meditate on the water, enjoying breathing, listening to waterfalls in the distance and birds singing. It's honestly the most blissed out feeling I have had for years. It wasn't illegal or bad for my health, it was just total peace and calm.

I got scared a couple of times trying to make sure I crossed the water well away from the ferries and trying not to be bobbed out by the wake of passing boats, but it soon passed and as terrifying as those seconds were, those feelings of calm that followed were perfection.

So - as far as mindful movement goes - I think this was probably my most favourite experience to date. The water time, the wild camping and the time talking to people and connecting in a space away from the business of the city was so rewarding, I would definitely recommend this experience to anyone who loves being outdoors and wants to challenge themselves to travel a little differently. 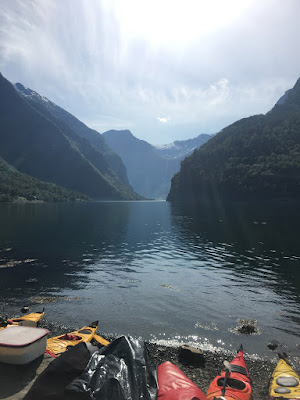 Bookings were made via
https://www.muchbetteradventures.com

My trip was led by
http://nordicventures.com