Bike Week - Not just for Newbies 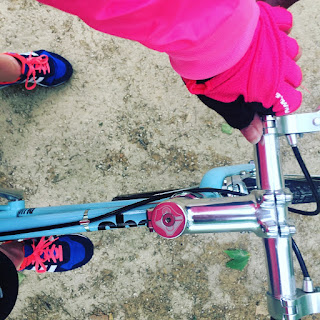 After months of staring at my bike and thinking about getting back to my commuter days, I finally bit the bullet yesterday and got my pedals turning again. Its been almost a year since my accident and its fair to say that I have not been feeling too cool about the prospect of dancing the wheels between the trucks and buses on route to work again. But I haven't wanted to lose the bike, or the choice, I just had a massive confidence drop in my ability to feel okay about getting back out there.

Truth is, I'm still not totally cool with it, but I am getting better. Following the old bike getting written off by the insurance company, I have been able to purchase a replacement Genesis Road bike (Ruby), but I still don't have the balls to use it. I don't want to be on the drops in traffic and this has led to me keeping it in storage, rather than putting it back out on the road. So I am dabbling again with my single speed PlugOne Charge (Old Blue) as its a familiar friend and the brakes are on the top of the handlebars. Its a joy to ride, but I have mostly got this year's Bike Week to thank for getting me back out there.

On June 9th, Lee Valley Velopark were offering a Bakes and Bikes morning, aimed at getting people to use the outdoor road track, listening to talks by Great British Bake off winner and track champion Sophie Faldo and the HSBC Breeze ride leaders. I was a bit apprehensive when I arrived, but I saw a couple of familiar and happy faces which made it okay. I sank a couple of coffees and a cup cake before being kitted out with one of their road bikes and a helmet, then edged out onto the track.

Its a bit like the old saying of getting back on the horse again, but after an initial wobbly lap of their 1 mile circuit, I remembered how much I love cycling. It was great to be able to play again and not worry about traffic. The team on hand were really encouraging and after 10 laps I got myself back off the course with a huge sense of relief and gratitude to be able to pedal again.

Since then I have had a work trip away and kept thinking I should really try to ride to work again. I have been putting it off, but yesterday morning something felt okay so I put on my cycling shorts, packed my bag and headed West towards work. My place is really close to Bow roundabout - a notorious cycle crash hot spot, but also a very busy part of the cycle superhighway, so I plonked myself in the middle of the peloton, sat waiting at the lights. Finding myself behind Barbara Super-Bell Ringer, a woman who wholly gave zero shits about the ferocity of her pedestrian alarm tactics, the first couple of kilometres were a lot less intimidating than I though it would be.

Just before hitting Whitechapel I was left to my own devices and continued up through the city and onward towards the Mall, Hyde Park, then Kensington High Street; eventually reaching the office after an hour or so, of good old fashioned fun on two wheels. The commute is a special kind of fun.. I realise that I have missed the chance to get my training in, while also getting to work and back. I missed the tactics and breaks in traffic when you can pedal like fury and chase the buses.

From zero to three rides in one day, yesterday was the start of something I hope to keep up and try to do a couple of times a week, for the rest of the summer at least. I still want to sell my Road Bike and get myself a dutch style bike that keeps me upright in traffic, but it no longer feels like that would be the wrong thing to do. My days of long distance cycling don't seem to be right back at the moment, but the fun of the ride is back in my heart.

We are moving offices in a couple of months, so getting a breaker to tootle down the canal seems to be a better idea to aim for. In the meantime, my single speed is all I need to get from A to B. I think a few more Bike and Bakes sessions might get my confidence back on the road bike, but happy to see what comes up, rather than totally fearing it anymore.

Lee Valley Velopark hold monthly Bikes and Bakes sessions to encourage access to their road track and facilities. To register and to find their next meet up, check the LVV website
Velopark Bakes and Bikes

Bike Week UK is a nationwide initiative to get people on bikes, encourage non-cyclists to get on two wheels and to encourage existing cyclists to find out more about the facilities in their area. For more information register on the Bike Week website
http://bikeweek.org.uk