Jars of Goodness and Kick Starting the Training 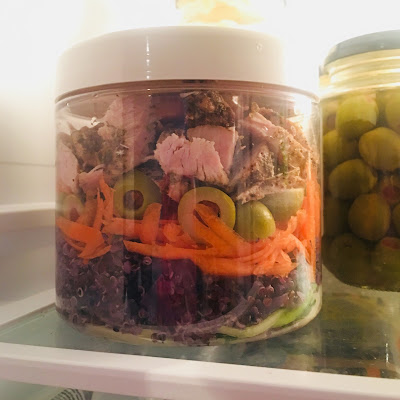 It's that time of year.. a lot of folks are on the dieting abstinence thing and feeling the squeeze after the annual seasonal gluttony.. I'm no different, but this year I'm trying to cut weight in a sensible way, by actually eating the correct stuff and trying to get rid of the extra pounds put on from missing training and eating way too many chocolates.

In 2017 I began to study sports nutrition, to help me get ready for the endurance events. I quickly learned that if you're doing a lot of events and mileage, you have to eat the right food. Even still I am a normal human being and have done the usual festive forgetfulness of all things good for me, so I'm starting again from scratch. My first session back with Chasing Lights this year, was tough and it wasn't helped by carrying all the extra pounds from the slow mo xmas show.

It's time to get real and sort my shit out.

So this week I've been going back to basics and measuring my food, cutting back on the processed stuff.. adding as many vegetables as possible, upping the protein, cutting down the coffee and taking on more water.. how hard can it be?

Well.. that depends on budget.. There's plenty of options out there if you want to get a Chef selected box of prepped or unprepared food delivered to your door, but at around £5 per meal per day, it's mostly out of reach for a lot of us. There are the deals in the supermarket to buy all the diet stuff, the pre-designed and controlled calories, all with modern lovely packaging, decreasing your waistline, whilst increasing your plastic consumption.

Indeed I bought the little pot in the picture, full of Japanese Veg on Sunday, to take as a picnic with my daughter. I chose it cause it looked healthy, the vegetables looked and subsequently tasted great and I knew I would re-use the tub. But I couldn't buy this brand every day, every lunchtime and not because there's anything wrong with the product. The jar is proving to be really easy to refill though, with all the veg and the good stuff.

You see some of us don't cut back the spending in January for a fun exercise in 'how to save', we do actually get plenty of practise living on a budget the whole year round. But going for the veg others don't fancy because it's not been pre-chopped, washed and portioned, not only saves money, but makes for a better attitude to food prep and I kinda enjoy the whole routine of thinking about my food a little more deeply.

During a mindfulness class a few months back, we explored the 'beginners mind' approach to eating a galaxy milk chocolate button. It's a strange phenomenon but actually tasting your food, rather than chucking it in and not thinking about it, helps to engage the brain in both the actual taste and the action of eating.

Some days just dining at my desk, I have forgotten what's been eaten, resulting in me not really enjoying anything and not being satiated by food which often isn't the right combination of nutrients and definitely won't give me energy. The end result is a sluggish / tired Soph. I can't train properly, or I spend hours at my desk and forget loads of calories which were inserted.  Wondering why I have been gaining weight from extra water on-boarding, I asked for some advice from a close friend and we concluded it probably just needs me to make a few changes, to stop my body protecting itself from all the added crap. And that's no way to prep for marathons, or just daily life... so where does this stem from?

Over the past couple of years food has become my dopamine enhancer, my bringer of happiness and my escape - you run a bit, you are rewarded with cake - this is the motto loads of people like me stick with. I probably won't change this way of thinking, as its been engrained since childhood, but I do need to change these habits and get back to a non-food based reward system, if I want to keep pushing myself to complete these long runs or rides. It's only fair on my joints and back, to make life a little easier on them and in my 20's and 30's I struggled with my weight a bit, but it was never this bad until I came to London and began my 40's.

I don't have a drink problem, in fact I hardly go out for drinks these days.. The bump on the head made me particularly shit at drinking, so although I do practice occasionally, it's not a regular part of my diet to consume alcohol any longer. When I first moved to London, I drank socially after work a lot, wondering why I put shit loads of weight on, despite doing f**k all exercise and drinking pints regularly in the week and too much wine at the weekend. I genuinely wondered why my weight was piling on.

If I had actually been able to sleep, I may have noticed how much better I functioned with a clear mind. Potentially drinking regularly didn't help with the sleep. I mean yeah you do eventually pass out, if you drink enough, but its not a good mechanism for shut eye.. It's also not a way to deal with your problems. Sure the blocking out happens for a while, but eventually that shit has to rise back up again somewhere, somehow and often when you least need it.

I had a few life experiences and wobbles, then realised how much easier it was to deal with my anxiety and depression if I cut down on the drinking. Hey presto it also reduced my weight, the exercise helped my head - I found a sweet spot and I stuck with it, because it appeared to be working. But through injury time and being more sedentary at work, I have seen the weight creep back up, the biscuit tin open frequently and the sadness at my ageing and mistreated body, finally giving me the b*ll*cking that I deserve.

But not for this year and not for any resolution business.. I guess I have just learned more about myself this past year and which bits of life I can make easy or hard on myself. I fully intend on trying to stick with the overnight lunch pack prep, the new combinations of foods and a willingness to do something different. Doing the same thing over and over and not making changes, clearly doesn't work. It's time to give it a shot at something better, more considered and mindfully selected for the days' needs.