Paris in the bag - Getting to the other side 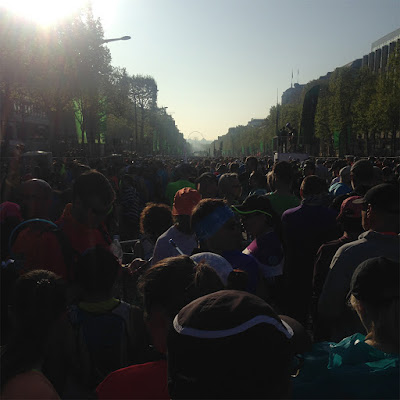 I've been trying to come down from a new found level of calm for the past two days, but Sunday seems like an age away already. The weekend was steaming hot and mostly very chilled out, apart from 6 hours in the Parisienne sunshine, completing my first marathon of the year, and of my life. I'm not gonna profess to knowing everything now, but I had a lot of time to work through my head while on that road and I thought I could at least share a few moments.

There's loads of things people try to describe about marathon running.. the sore bits.. the wall.. the zen like state pondering the world. I had read up on how to counteract the sore bits, by applying the vaseline, my blisters have not been present since February, as my feet have finally toughened up - I think I did as much training as I could squeeze in and I felt ready to tackle it

I arrived in my starting pen really early, so the crowd could build around me. I don't get on with big events very well usually, but I've learnt that I feel better in the crowd if it consumes me, rather than if I have to enter into it.. if that makes sense. I needed my music for this run, so had filled up my old iPod and kept my phone off for emergencies.. anything to stop the head worrying about shit I couldn't  control and all items packed well away so I wasn't going to be distracted.

I had an emergency 10 Euro note and spare hearing aid batteries, my credit card, a Tribe bar and a back pack with 2 litres of electrolytes mixed with water - I knew I was prepared for getting home or out of trouble if I really needed it.. the thing is I wasn't about to quit this and my ability to keep going surprised me more than at any other event I have undertaken before. My last long run I had quit at 10km, so why was this going to be any different?

I always use my time on long runs, working through conversations I have had with others, a method of mentally filing all my thoughts and worries away. I had been out with some of the CLC girls running at a Lululemon event on Thursday and had some good chats on our run, but started to ponder a conversation I had with Sam. We were talking about the drive to do the events I have scheduled and how I continued to keep sticking to my plan.. I explained about my inner monologue - the voice that continually calls me a stupid t**t for getting myself in these situations and for some reason on Sunday, that voice just wasn't there. I thought about what makes me keep going and at about 23km on Sunday I had a simple epiphany that seemed to make sense.

You see when I was 21 I became pregnant and I had my daughter when I was 22. I saw the father of my child twice during my pregnancy and it was clear I was going to be a single parent, youngish and at the time dependent on benefits - it wasn't a great plan, but it was the hand I was dealt with, so I got on with it and did my best. The thought struck me on Sunday, that this life lesson had given me much more than a rocky road, it had also given me a no shit's given approach to life. It taught me some valuable lessons about quitting and that sometimes, what initially seems like an option, isn't going to be any easier than getting on with the thing that's standing in your way.

Its the lesson that taught me half way through swimming the Serpentine last year, that although I could say 'Yo - I've had enough' - it was going to be infinitely more difficult to be dragged out of the pool by a lifeguard kayaker, mid way round, than it was to just keep swimming the course - even if I was slower than Cheech and Chong navigating a Scrabble board.

You see you can't just turn around to the nurse part way through giving birth and say - "hold up love.. this is a bit more pain than I was expecting.. I think I'll stop now".. you just have to keep going with that stuff - the baby isn't going to magically disappear and when they arrive, they're looking at you for all the answers. So although there are good and bad days - giving up just wasn't going to be an option.

Throughout the past couple of years, during my worst days, it has been this overarching need to always be there for my daughter. The not wanting her to be left dealing with the world alone and my absolute drive to get better and pick myself back up. It is this complete desire to not give up that helps me get to the end of every event and a few strategies I have developed to help me keep logical when everything really hurts.

But at 28km it really really hurt.. My ankles and my back were screaming at me. My hands were swollen and this freaked me out a lot. I kept making fists and squeezing my fingers open and closed, to get the blood circulating properly again and I worried that I had taken on too much water. I since know that its a sign of your water balance not draining liquid quick enough from the lymph glands and its not a sign that you are going to keel over. But when you're running alone and in hot temperatures, you can start to panic as much as when you Google a minor ailment and convince yourself you are gravely ill - any anxious souls beware!!

I decided that I should eat something salty at the next refreshment area and this seemed to do the trick, but not before a few more weird moments. Prior to all of this, I had a weird visual problem at around the 11km marker too, where everything on the left hand side of my vision was crystallised and shimmering.. I worried this was a sign I was due to pass out, or that my cheap sunglasses had given me symptoms similar to when you stare at a lamp and then you see the shiney blob in front of your eyes for a few moments after - either way it scared the crap out of me, so I tried to run in the shaded part of the path until it passed and I left the sunglasses off from that point.

A while later I slowed to a stop, I looked behind me and checked no-one was about to run into the back of me and I folded down into a kinda vertical child pose in the middle of the street.. everything really hurt and I just wanted a few moments of nothingness to happen. I needed to be still and to allow myself to not give a f*ck about where I was and what I was doing..

Then my little inner voice appeared, but this time it was really fucked off with me and told me to "get up, sort your shit out and run up the bloody hill". As I unfolded, swearing at myself and standing up, I caught the eye of a lady who had watched me crumple and who was shouting at me too.. we smiled - I cried - I ran up the hill and I kept going for a while longer.. There were several signs that people were waving, that made me laugh really hard and I thought back to Craig's list of Manchester signs, from the week earlier. Memory drifting and stupid thoughts popping up constantly, music always helps me shut down the negative, as it usually sparks loads of positive memories. I understand that some people feel you should be present for all senses, but in this type of event, I need the tunes to boost me and I like to take in the visuals on my journey.

I had a few more weird moments of crying, feeling really sore and being really overtaken with how emotional the whole thing had been and eventually at about 36km I allowed myself a walk for about 500meters. I stretched my heels by standing up and down on the edge of the pavement for a few minutes and carried on, until it dawned on me that walking was no less painful than running, and that running would mean that it would all end sooner, than if I lolled down the road feeling sorry for myself. The last stage of the course was around a park area, so there really was no other way home, than to keep moving forward.

So I looked down the middle of the road and I focussed on a spot about 300meters ahead of me and I zoned out on a few tunes and carried on.. I wasn't going to catch up with any of the pacer groups, I wasn't going to stop hurting, but crunching up those last kilometres, by just watching the line in the middle of the road was enough to get me home and out of the heat. Janelle Monae came on my playlist at precisely the right moment and I completely zoned out, like a little road runner passing through the desert, speeding past that inventive coyote..

As with all races, no matter how long or short the distance, my final strategy is to break down the last couple of miles, into how many laps of Mile End track that would equal. Then I imagine I am going for a jog with Chris and Junior and I count the laps back down to zero. I know I don't always manage to make it down to Track East, but Paul, Chris and Junior helped me so much in the early days, that their words of support and runners wisdom often pop up in times of need.

Eventually it came to an end and I was so happy I had stuck it out. I had convinced my stupid head that I was in control of myself and realised that mind and body were capable of working together to finish what we'd started. I had to meet my daughter 'Pops' under the Arch de Triumph after 5pm.. we were going for burgers - it was going to be nice to sink a cold beer, I was going to do this.. It took me 20 minutes to make the 200m to find her after the finish line, but we got back together eventually.

I've since come home and although my event diary is fully booked for this year, I have picked up a place for Brighton Marathon 2018. I'm so pleased I have done this and though I am now massively daunted about the idea of doing the 50 miler in October - we'll get there somehow.

For anyone doubting their ability to undertake these events.. if I can do this, you can too.. It's a huge mind game and a lesson in listening to the way your body is coping with the pressure you are putting it under. But if you have trained and prepared yourself for the task, you will be capable and you will finish it.. You will get emotional and you may sleep for 10 hours straight after, but hey - that's cool xx