Back in the Saddle - Time on Wheels 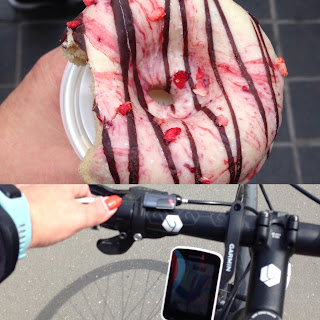 Its been a long time since I dedicated my time to two wheels, as the last few months have been all about time on feet, crunching miles for runs and resting ready for Paris. I have a few months now until my next marathon and the not so small matter of two charity rides to complete in July.

The first is the 3rd TRIBE stage - a 6 day ride from Munich back to the UK, followed by the PRU100 at the end of July.. but these are just the excuse I need to get out on my bike as often as possible and to geek out on some new kit. So yesterday was a bike ride to Greenwich to catch up with friends and a chance to test out my new Garmin Edge 820. It's great to be able to learn to trust the unit and not rely on my phone for the journey, particularly as it will be my daily guide, later in the year.

Obviously sampling doughnuts was a necessary part of the day and one I remembered as a major bonus in cycle training.. I can now keep riding out to destinations, for vital cake and tea rations and with my new navigation tool, the options are pretty unlimited. Running doesn't give you the same access to cake, as it sits in your stomach and makes you feel terrible if you start off again too quickly.. Cycling though - all good.. helps prevent the bonking.. which can only be a good thing.

So May and June are looking pretty tasty.. I will be continuing run club training, but will stop the long runs for a while and have booked in a couple of interesting long rides with friends.. which is the best way to enjoy training. Just as I have a great bunch of people to run with, my oldest cycling buddies are back in Wales and I am really looking forward to heading up some hills with them soon.

Dave Hann, one of my oldest Cardiff friends is organising a couple of rides on a route called the Witches Hat, a 100km brevet which will snake around South Wales on a few dates but I'll be joining them on May27th. Hoping a few of the ladies can make it to this one too, but looking forward to getting out of the city and hitting the countryside.

We've also got a night time ride in June from Cardiff to Swansea Bay, which is 100% created by a group of riders which has grown year on year, much like the Dulwich Dynamo.. there seems to be loads of interest in it this year and I'm looking forward to attending for the first time with my pedalling homies. For more info and if you want to join us, check out the info on Facenark
https://www.facebook.com/events/1730570620539256/

In the meantime, there's a few people I've met through the run clubs this year who are also through the ballot for the PRU100, so there's loads of chances to get out on the road now the weather is better. Plenty of cake missions and excuses to get all pedally up in here - I cannot wait xx