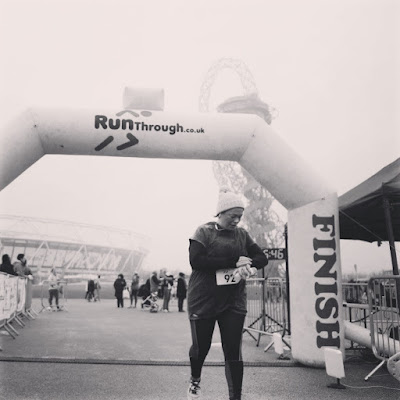 The racing calendar for the year has been filling up and I've now got 10 events booked, to keep me out of trouble, to fill the mind with smiles. It also needs planning so I can work out my fundraising for the year, get my training program planned and work out the finance for getting to all these places.

Though its great to have a couple of big things to aim for, I've been getting less and less impressed by the BIG events, particularly those charging big fees, to run inside a huge sea of people. I find the bigger events really mentally challenging and my anxiety levels often leave me more freaked out in a race of thousands, than I do in a far smaller event.

So to start the year off, I headed to Saltaire at the end of January, to complete a Half Marathon along the Leeds to Liverpool Canal. The organisers 'Its Grim Up North Running' were amazing and really knew how to look after us all. With true northern spirit the weather had lashed down overnight and the tow path was washed out with giant muddy puddles everywhere. No problem for these folks, they provided us all with a really well organised event, covering 4 distances - 5km, 10km, half and full marathons. There were about 250 runners across all distances, running an 'out and back' route in two directions along the canal. The marshals, stood through the cold, wind and rain and kept smiling as we passed, kept dishing out the jelly babies and keeping our spirits up. Then to top it off, our welcome back to base included a huge choice of cake, and a goody bag complete with medal, chocolate orange and a bottle of IPA. I was a very happy bunny!

I also had the pleasure of meeting two gents on the way to the race. Costas, running his 79th marathon and Michael, aged 76, who started running marathons when he was 45. Both were great to chat to and really inspired me to think about this journey as a much longer affair, but also how much nicer it was to engage with people at smaller events. I've been to other similar sized runs over the past few months and I love having a chat with folks near the start line, then catching them post race, pooped out but happy. On most occasions I take myself to the race and don't know anyone there, so whilst I do like running the race on my own, it also feels good to meet other people who have this bug too and to hear their stories on why they run, what drives them to push themselves further.

Today, I ran with my running group, Chasing Lights Collective, at the RunThrough 10km race in the Queen Elizabeth Olympic Park. The CageRunners CLC crew, meets 3 times a week and is focussed on breaking away from the areas of life that restrict you, maintaining the wellbeing of its runners in all areas, but specifically awareness of mental health and training wisely. Led by run coach Chevy Rough, and vice captain Nav Kiani, the group works on running technique rather than mileage or speed. Part of the Run Dem Crew family, I was introduced to the team by friends Chris and Junior from Track East last year.

Since then I've been joining the group on and off since late October, so I'm just starting to get to know folks a bit better. I was very anxious when I first attended, as most of my training had been done alone, but I soon realised that this group had everyone's backs and the benefits of being in a group within which I could be open about my recovery. The support I have received from Chevy, Nav and the crew regulars has been really influential these past months, each small conversation, helpful nudge or welcome, has given me the confidence to keep coming back and to get more involved.

So we gathered today to attend the RunThrough 10km event. RunThrough are a local Race organisation, who I ran with last November too, to complete the Victoria Park half marathon. Their events are usually capped at around 500 people maximum and its this mixture of low numbers, good organisation and friendly atmosphere that makes a big difference to how I cope on race day. The CLC team were in full effect, supporting each other and a couple of runners who were completing their first 10km races. Other members of the crew came along, complete with flag to wave and cheer us on.

I got new PB, which was great, but really the biggest joy was feeling that I was being part of the family today. Having some good chats and giggles before and after the run and knowing that you are part of a team who is ultimately looking to support each other, to get the best from any challenges they may set. I am looking forward to more time with CLC this year and also to running the smaller events; having the random conversations with the many runners who gather week after week, to blow the fog out of their minds and to brighten up the grey days.

I have a couple of huge events to get my head around this year, but of the 10 events on my plate so far, 7 of them are organised by the smaller guys, not the massive Vitality runs. To me, they feel more enriching, more real, better supported and they help me focus on my run more than avoiding the crowds. Watching thousands of people passing me only increases the negative internal voices, trying to make me stop and give up. Being amongst a group who surround you with humility and support, is far more rewarding than struggling to find your footing amongst the bigger boys.

As Michael and Costas told me on that cold morning in Saltaire, it doesn't matter how fast you are, if you run, you are a runner. I'm just pleased to be part of the pack xx
Labels: Cagerunners Chasing Lights Collective Fundraising Goals Its Grim Up North Mind Running RunThrough Support Training
Location: Queen Elizabeth Olympic Park, London E20 2ST, UK