So January came to an end and I managed to complete the RED January task of movement, on every day that I wasn't on a plane. That being said, I had a lot of travel in January and it was great to be able to see some sun and palm trees for a couple of weeks, while working away, but I am super tired.

Already in the diary from last year was an artic adventure with my daughter Poppy. I have been trying to get her excited about an adventure holiday for a while, but ended up having to get the big guys in and persuade her via the medium of 300 huskies.. Puppies and everything!

So my 2nd booking with Much Better Adventures, who totally came up with the good stuff once more. We were booked into their Aurora Camping and Husky Sleigh Riding experiences in Tromsø Norway, a destination that is the highest north I have ever travelled to. We arrived on the Friday evening to a heady -13C and quickly remembered, we were in the Arctic, so it was likely that we were gonna have to glove, hat, boot it up for the duration of the weekend.

Tromsø is a beautiful port in Northern Norway and is also known as the 'Gateway to the Northern Lights'. It's nestled into one of the last of the islands before the expanse of water and ice that becomes the artic wilderness and upwards to the north pole. It has long been famed for its views of the Aurora and during the winter months, as it never fully sees sunrise for more than a few hours, the lighting even in the daytime, has a soft blue dreamy appearance.

We enjoyed a couple of days in the town on either side of our adventure with the team at Tromsø Villmarkssenter. We went to the Polaris centre to watch panoramic films on Artic animals and the Aurora, though had we realised it also housed a Sea World style Seal aquarium, we'd likely not have supported it. However.. we also had a good look around the harbourside, the Modern Art museum and enjoyed a bit of Mum and Daughter time, chatting and keeping warm. 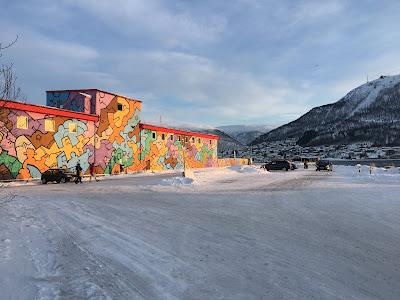 There's a great mixture of modern art and traditional Sami culture adopted and celebrated across the island to keep the eyes happy amongst the act of moving around in sub zero conditions. Keeping moving and sightseeing, whilst not the fastest paced exercise I have ever taken, walking on ice was definitely engaging leg muscles I'd not used for some time. The calorific burn of staying warm in these conditions also helped to mop up the chocolate cake and marshmallows we toasted over the fire on Saturday night too.

Though there is still a good view of the Northern lights in early February, we heard that there are strong and weaker years when they are going to be most active, due to the mixture of planetary alignments, the earths' magnetic shields and ferocity of solar showers, so we'll be going back in 2024 with old school cameras to get some better photographs.. Not to selfies - your iPhone battery will drain before your eyes in moments due to the cold.. Pops InstaMax pictures came out well - film cameras are the best option for this destination.

During the time spent in the Tromsø Villmarkssenter, we enjoyed hanging out with the puppies and the older dogs. They were all really well looked after and incredibly happy to have a hug from the visiting humans. Each team of dogs were amazing to watch on our ride and also during the time just seeing them around the centre, which is owned by a professional husky racing team. We heard about their training plans, the ways the puppies are paired up with older dogs, how they are cared for and truly these looked like very happy pooches indeed.

Our group was a mixture of tourists from Singapore, UK and Norway and the ages varied from Grandmother with Grandson, to couples as well as small family groups. All of the warm weather suits, boots and sleeping bags were provided and made us feel cosy despite the temperature outside.
Though this time around it was mainly the dogs doing the exercise, I would definitely recommend a trip out with the Husky team, but if you want to get more involved and a more hardcore workout, you can always try the self drive option and chase your team of dogs around the course.

Aurora Camping and Dog Sledding in Norway from Much Better Adventures on Vimeo.

If you would like to receive a discount for booking a trip with the team, please use the following referral code 'SOPHI5533' to get money off any Much Better Adventure expedition xx