Skip to main content
Labels
Posted by Soph Barras May 28, 2018 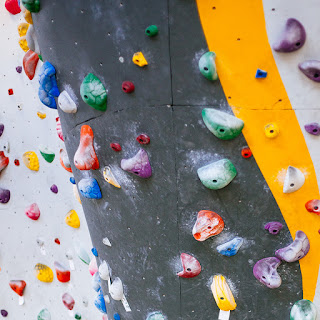 Over the past couple of months I have been getting used to a lot of change at home. My daughter Poppy has moved into her own flat and my time has been spent on moving flats (yes multiple - it's a long and boring story). My role as every day mum and my household responsibilities have changed and I'll be happy to admit, I'm finding it a bit weird and strange.

So its been a perfect time to try a few other new things out. Bouldering being the first one - I tried this on the first Monday evening after I started my new flat share. The flat share in itself was all new - I've not been in a flat or house share since I was 23 (F**k that is actually 20 years ago!!) so learning to live with another person who isn't family, a partner or a friend, all brings changes too.. but its working out pretty cool.

So aside from the change in accommodation - how did I get to the Wall?

Run Dem Crew have collaborated with Hackney Wick Bouldering Project, to set up 3 sessions of Bouldering, Yoga (with Sanchia) and Creative Writing (with Charlie Dark) and it was just the right combination of comfort and new challenges. The event 'Don't Look Down' is set in HWBP and the location is great, really easy to reach from the train, their set up is really safe, encouraging and relaxed. It's not the giant warehouses I have seen advertised previously, yet there is a lot of wall choice and routes for both newbies and the more experienced.

Aside from nearly bursting into tears on Charlie during the creative writing session, it was a lot of fun and to be fair, even the fluctuations of emotions was a good thing to let pass. I have stopped feeling bad about getting teary these days. I'm not sure if the mediation practise is leading to a willingness to accept feelings that come and go, but I no longer consider myself stupid for feeling sad at times. Its a thing - it happens - I know that trying to block it makes me feel worse, so - its okay to let them flow.

But for bouldering - I have wanted to try this a few times, but was always worried I wouldn't be able to hold up my own bodyweight, as I wrongly assumed that it would all be about arm strength. There is a lot of leg push involved too and a lot of mental challenges, trying to work out which way to go.

Having a colour coded path up the wall was a revelation too - It honestly seemed like a totally impossible task initially, but its a really good workout and got the adrenalin flowing several times, as I lost my route back down.. I must be part mountain goat as I had no problem getting up the wall. Getting occasional panic realising that I had chosen the wrong unwind back down the wall was a little worrying but with the crew around providing direction from below, I reached the floor safely again without bombing out on the padding.

Unfortunately I'll miss the last 2 sessions, but as it's now nearly on my doorstep I'm thinking of potentially trying the occasional weekend climb. I'm also keen to take up more chances to squeeze in some more yoga time too.

Yoga with Sanchia is always a blessing and I have been to her Gyal Flex - Yoga and Meditation sessions with Holiday Phillips, a couple of times this year although I've missed Tuesday nights at RDC for a while. I'm still not flexible in my back and the extra padding around my middle brings challenges when trying to fold or balance, but I have noticed my arm strength is getting better and my leg muscles are learning to stretch more. Maybe this is also due to learning not to hammer it hard too.