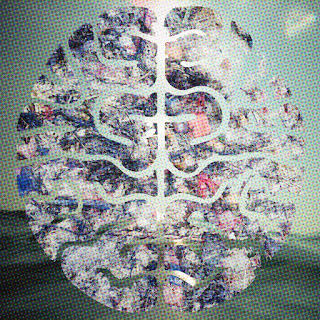 This weekend I joined the TRIBE for their trip to the Isle of Wight, for a 2 day Ultra, crossing the island from Ryde Pier to Yarmouth. The team were gathering together runners who would set out on a route along the coastal path, with the main mileage covered on Saturday, 26 miles and a breezy 13 miler on Sunday before heading home; full up of sea air and the magic runner vibes.

I signed up to this a couple of months back, but following the dizziness I encountered in Birmingham Half, I was really unsure of my ability to complete the route. As a result I'd been planning on taking the trip with the team, but taking my bike and just having a tootle around the island. Seemed like a great idea at the time - as they always do - but this past week I had been getting the fear about getting stuck / hit / all the many things that can go wrong on a solo mission on two wheels.

I've run with the TRIBE a few times before, but there's a clear difference between our paces, so I knew that if I was to take this on, I had to be prepared for being mostly alone on route. I'd not run further than 13 miles since June, as the October Half had been my longest run since the crash, but I have walked a lot from work to home and on days out, so was reasonably confident that it would be okay. Honestly more scared to ride my bike alone, than running 26 miles - how times have changed!

Arriving at the station, it was great to catch up with people I'd met on Run for Love, a couple of the girls from Run Dem Crew were also onboard, so the positivity was flowing, despite the super early Saturday start. We made the train, survived the ferry and found ourselves on Ryde Pier, ready to set off. I had the biggest backpack to run with, compared to everyone else's but it was way lighter than my Race to the Tower pack, so I was okay with it.

The trails and events I have entered over the year have required a number of safety gadgets and items to be carried, but while it looks like loads, to my anxious mind - knowing I can keep myself warm and safe, is worth lugging it all around. I had my route on my phone, my Garmin and my battery charger, first aid kit, foil blanket, waterproofs, even the compass - oh yes! I was prepared.

I dropped back almost as soon as we left the pier and knew I had to just get my head into the run. Tom, Guy and Rob are always really supportive and I would love to be able to keep up with the main group, but I am just not at the same rate of fitness. I have been strictly party pace since my crash and totally okay with that. It's still amazing me, that I am able to keep doing this stuff, but I need to be realistic in my abilities as well as wanting to push myself - there is a happy balance to strike.

Guy stayed with me on his bike for the first 6-8km and it was good to run/walk and have a proper catch up whilst travelling along. About half way through the morning I realised that it was exactly 4 months to the day since I had my accident. He was cycling behind me on crash day and had the unlucky job of phoning my Dad. It was great to have the encouragement at the start of the day, but I was feeling a bit guilty, now we were far behind the main pack, so I assured him I was okay and did my own thing from this point until just before reaching Cowes. 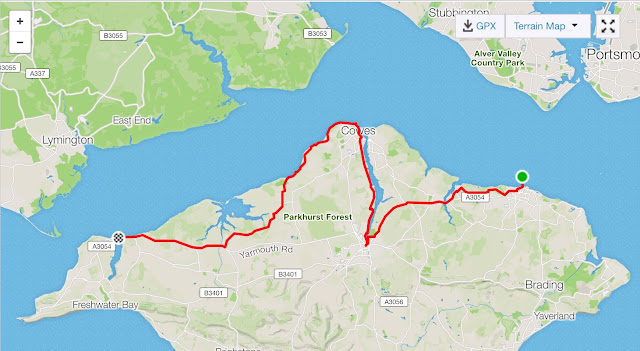 I always struggle for the first 5km of every run, whether its short or long. Feeling self conscious, slower than everyone else, I keep getting weird worries about breathing incorrectly. Once those first few miles have passed, I get into the rhythm of the run and I start working through little games to keep my head in check. Repetitively counting from 1 to 20, at the same pace I'm running helps me clear my thoughts, but I also tried some new breathing techniques this time, from recent Chasing Lights sessions.

When I arrived in Newport the route came away from the road again and along the estuary, very close to the water. It was a beautiful route, but there were many times along the path where I had flash points of anxiety. I love running alone. When I'm on the long training runs near home I really enjoy the more desolate industrial parts of the Thames Path, but this route was particularly quiet and narrow in many places. I had many moments of thinking it would be a perfect destination for an episode of casualty, but I think this is half the appeal to running in new and strange places. I knew I was on the same route as the others, their footprints were given away in the mud, but frequent checks to the map, put me back in the happy zone.

After a brief catch up with Guy again and a short water stop in Cowes, I headed back out through the town, along the esplanade and onto the main cliff top section of the path. It was blustery, I was very much alone on the hill top, but the view was stunning.

I'm sure that everyone who runs trails enjoys the freedom of being out in the open, but there's definitely a positivity in scaring yourself and making yourself work with skills, lost through years of desk time. I need to push myself into doing this and I loved being able to see all the small huts and retreats away from the rest of the island, places you'd only reach on foot.

Running over a cliff top, on a path that at times is so close to the water, that you keep checking it you're definitely on the right route, holding on to the barbed wire 'safety' net for reassurance. I need this stuff in my life. It makes me feel real and alive and with all senses aware of the beauty and fragility of everything around you.

I have spent years running with music, closing myself off to the traffic, the world around and getting absorbed in the bassline, but there's so much more benefit to being in touch with what's happening around you. Hearing the birds, the sea lapping, the wind blowing, it all helps to keep you grounded whilst passing through the landscape.

When the coastal section ended, I checked in to let the team know I was safe and carried on the route back inland, heading towards Yarmouth to complete the course. It was starting to get dark and I was now starting to be pleased with my anxious self for packing my head torch, but although I'd run out of water, I was starting to realise that the end was going to be possible.

I've got really bad form for running lapped courses. Mentally I really struggle to complete them. Put me on a hill side and give me a choice of 'stay and be cold', or 'keep your feet moving' - I know my head is way better equipped for that decision. I found the road and worked out the path home, after the muddiest field ever and a strong desire not to test if its' electric fence was plugged in.

I got a call from Guy to let me know they'd arrived safely and to check where I was, as the last planned section was through the forest, but the path was too bumpy for the bike to pass. Given the time of day, the loss of the light and a need to keep safe, we figured I should drop a couple of miles, to stay on the road, so he could meet me to complete the route.

Having company, a swig of water and a couple of snickers mini bars made all the difference and we finished off the last few miles at a good pace, with Guy cycling behind me to protect me from the traffic, where the pavements weren't around. Given that our last challenge had ended so badly with paramedic support, it was really nice to complete this run with him and to arrive at our destination with everyone to share smiles, a few pints and a non-disappointing pie.

I aimed to complete the day, I totalled just over 40km and am really pleased to end the year on this. It was a major milestone to share with some really good people, lots of laughs, a couple of sore legs, but a bunch of great memories. I had no problem deciding to bow out of day 2 and take a stroll around the harbour. I needed the rest, more than more miles, so it was nice to check out some more surroundings and watch the birds on the sea and bobbing about the boats. 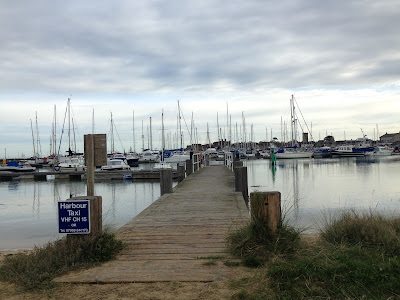 Big Big Thanks to Tom, Guy and Rob for organising this for us all and also to all the runners, for their encouragement and support. I'll be back to join you all again somewhere next year - It's always a pleasure to run with the TRIBE xx

For more info on TRIBE Nutrition Bars and their community of athletes, please visit:
https://wearetribe.co