The Need to See the Sea Sometimes I think up sound ideas. then other times they're a bit less sensible, but once I'm on my way, there's little chance of stopping me from trying to complete it.

Saturday morning, I decided to ride from Stratford to Clacton on Sea (approx. 75 miles). I put out the idea to a few folks, but found myself at the meeting point alone, with two choices.. either give up and go home, or give it a try. I've had a tough week, needed some fresh air and had prepped myself up for a long ride and packed the right stuff.

80km was the furthest I had ridden to date with the group in Girona. Most of these miles had been tackled alongside coach and hero John Hampshire.. So 120km was going to be a little bit of a challenge. My training plan for the PRU at the end of July, has been winking at me from the calendar for many weeks now and I had missed my chance to complete this distance so far, so it was weighing me down.

I am also getting a bit worried about the TRIBE ride in July which I had slotted in ahead of the PRU, because on paper it seemed like a do-able activity. The closer it gets, I am less confident, but heading towards it with anticipation. Its 660 miles in 6 days and while our bags will be taken from each city to the next, I'm feeling like at my pace, it's highly likely a lot of this route will be ridden alone. Each day will also be an average of 125 miles, so the shock to the system if I don't train well for this, could end up being way too much.

I also worry about being able to fix my bike on route. After my chain broke last weekend, I had started to get anxious about the many mishaps that I really need to know how to overcome. Easy stuff - you know changing a tyre, fixing a split chain, minor but when you haven't done any of these things for a long while, or before, its a valid worry - especially when you are alone, maybe half way up a mountain, probably in the searing heat of mid summer.

Learning to trust my Garmin is also taking some practise. I have been planning routes and going out with this a few times recently, but not knowing how to set up the power options correctly, had left me out of battery, with no directions and back to the safety of a paper map. Unless I buy a huge f*ck off bundle of paper maps for that gig, I've got to get used to reliance on tech to get through the route safely.

So... I have booked myself on to a Touring Maintenance course at London Bike Kitchen this month, to help learn some basic skills - how to use my chain tool, how to spot check gear problems etc. Which can only be a good thing and will be useful for other rides. To help me not stay awake worrying over this specifically - I'll happily pay to remove those fears, but LBK is also a great source of help to cyclists in the city, its aims to educate and assist, rather than raising profits.

Switch back to the Stratford Clacton mission... Before leaving the house, I had realised one of my tyres were pancake fashion. Alex Rims and the removal of skinny tyres are not my greatest skill. I couldn't swear loudly as my daughter was sleeping next door and I could't f*ck the whole thing off, as I didn't know at this point, that no-one was waiting for me at the meeting point. So - you know - it got fixed. Confidence boosted and me a little flustered, I headed out to the Velodrome.

My two options were laid out ahead of me. I need to learn how to rely on myself cycling alone, long distance and not to be scared of doing this in the UK, let alone across Europe, so despite being a little concerned I decided to go ahead with it. I had shared my route online. At worst I would get stuck somewhere, but if I kept to my plan, I would be found if it all went tits up. It may seem a bit dramatic to think like this, but you have to remember, I am currently working through severe anxiety so my brain will overthink and come up with a million points of failure, before I have even begun my journey. I'm just wired this way.

It turned out, that I had managed to plot out a really nice route of mainly B roads, through leafy villages, passed thatched cottages, alongside running squirrels and rabbits, within woodland and some well tidy hills. It was beautiful and a much needed escape from the city, with rolling lush green hills - kinda reminded me of Teletubbyland for some points.. I felt safe, I saw other cyclists alone and in groups. I really didn't notice the miles clocking up and for once I had removed all music and was exercising outdoors, just being present in where I was and the environment around me. Peaceful. Mindful in my movement. Happy.

As I was expecting to perhaps be with a group who may want to jump out at the mid point, I took the route into Chelmsford and past the station. This path through town was totally fine - it's quite an easy gig to get through, but on the other side, my trust of the Garmin was failing. It had taken me in and out of a cul-de-sac twice, I was getting bored of being dead ended, so I followed my instinct the 3rd time it happened.

This proved to be a very bad choice, as I then found myself cycling down the hard shoulder of the A12 and really really scared. I tried not to have a complete meltdown, as a large Morrisons truck beeped its horn at me, when it pelted past a couple of meters to my right hand side. This scared the sh*t out of me and made me speed wobble towards it, sending me into a complete spin out, though instantaneously making me realise how much I love life.. How much I needed to focus on the here and now and teaching me that my recent meditation practise, hadn't been hopeless at all. I pedalled like fury, while concentrating on the breath and nothing but the breath for the next couple of miles, until the joy of a junction appeared on the horizon and I could get the hell off the roadside.

As I came to a halt, well away from the trucks and 3 lanes of fury, I turned and spied the nicest looking pub to my right. It had my brothers name scrawled along its side, like a beacon calling me towards it. I needed a break. I needed a beer. Then I realised there are some positives to riding alone - you can start and stop whenever you want. If you need a cheeseburger and  a pint of shandy - there's no-one to run it by, you can just stop. So I did and it was soooo good. 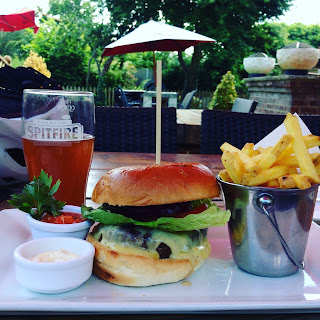 Refuelled and chilled out, the seaside was calling me and I carried on my way. Now relying on the Garmin and trusting that it wasn't telling me to go into these Cul-De-Sacs, it was actually showing me where there were bike paths alongside the main roads. It was trying to keep me safe, not piss me off. I really must learn to read instruction books when I buy new Tech. I have what Eddie Izzard describes as Techno Joy, not Techno Fear.. When you get a new gadget and you throw the guide away, as you have absolute (misguided) faith that you can figure it out.

With the seaside in mind, I kept going, stopping occasionally at the odd beer garden to refill my water bottles with squash, passing occasional two wheelers on their Saturday rolling routes across Essex. I was totally pooped out when I finally reached my destination, but I was really pleased I made it to the end. A pint of IPA, an ice cream and a sit by the shore, watching the windmills and waves, was all worth the slog it took to reach there.

On my way I'd stopped to fix a pedal, I had overcome a few things which were otherwise unknowns to me at the beginning of the day and after 7 hours of bike time, I had mentally filed most of the sh*t that had built up this past month. Though unintentional I'm really glad that it ended up being a solo mission, as its helped build my confidence a little and given me some time to realise that this mindful approach to tasks, life and attitude, is somehow working.

Sticking with this retraining of my head, to look at the moment I'm in, to enjoy the space around me and to use meditation not as a way of getting to sleep, but as a mechanism for calming down in stressful situations; all of these senses are finally coming together. Trusting yourself and the tools around you is only part of the battle. Feeling capable of pushing yourself beyond your worries, is good. I'm going to keep working on that xx 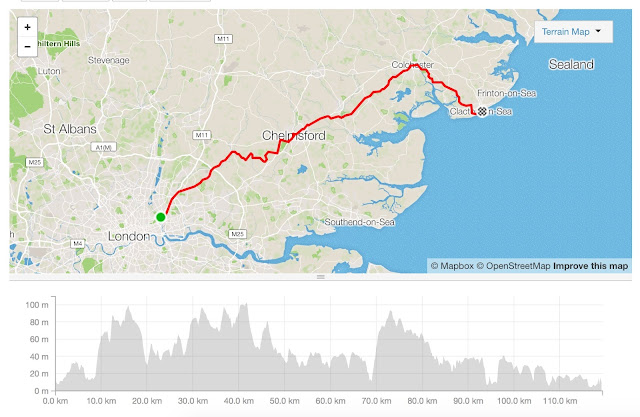